What to visit in Łódź

What to visit in Łódź?

The history of "HollyŁódź" is in fact the history of the post-war city of Łódź. The Feature Film Studio was established after WWII and called the “Dream Factory”. Most Polish films in the postwar era were recorded there. The DoubleTree by Hilton Łódź hotel was built in that very place, and its interior design reflects the cinematic history of the site. The other world-famous place was the Film School, a prestigious academy, where generations of prominent Polish actors and directors studied. The School's symbol is the famous stairs where Andrzej Wajda, Roman Polański and Krzysztof Kieślowski used to sit when they were young.

Right next to the Film School is the only Film Museum (also called Museum of Cinematography) in Poland. On the film routes of Łódź, there is also the Walk of Fame on Piotrkowska Street, modelled after the Hollywood Walk of Fame, which consists of over 60 stars dedicated to actors, directors, cinematographers and film music creators. You can also visit numerous open-air film locations. The city "has starred" in several hundred films and TV series, and the number of films produced with Łódź in the background is still growing. Some great examples include the Oscar-nominated "The Promised Land" (Ziemia Obiecana), "In Darkness" (W ciemności), "Sexmission" (Seksmisja), the iconic series "Stakes Larger Than Life" (Stawka większa niż życie), and the latest productions: the Oscar-winning "Ida", "Afterimage" (Powidoki) – Andrzej Wajda's last great production – or "Supt. Alex" (Komisarz Alex).

The Trail of Łódź as a UNESCO City of Film allows you to discover the cinematic heritage of Łódź, which belongs to the UNESCO  Network of Creative Cities. When planning your walk, you can use the map on the website: www.lodzcityoffilm.com. The printed version is available at the EC1 Łódź ticket windows, in the Łódź Tourist Organisation or the Łódź branch of the PTTK (Polish Tourist and Sightseeing Society). Information boards describing the scenes of film scenes that were shot in a given location will help you find interesting places along the route.

You may have a walking tour with one of the Łódź guides or choose to stroll around on your own, with the audio guide available on the project website (also available for those with hearing impairments). You will be guided through various film locations by the film critic, film expert, translator, lecturer, screenwriter and script consultant Michał Oleszczyk. 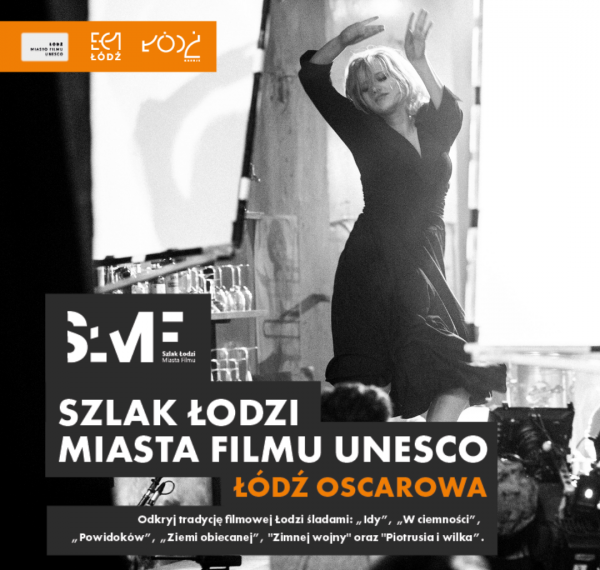 Several generations of Polish children grew up watching bedtime animated stories about Uszatek the Teddy Bear, Colargol the Bear or the Magic Pencil. What do these children’s films have in common? They were all created in Łódź. Se-ma-for has been making animated films, both tales for children and films for a grown-up audience, for 70 years now. Two of these productions have been awarded Oscars! If you want to learn about the behind-the-scenes of animation, see the film sets and meet your favourite cartoon characters, visit the Film Museum!

If you are visiting Łódź with your children, try following the Children’s Animated Film Trail (also called the Fairy Tale Trail). Find ten small statues of characters from animated tales for children waiting for you around the city to tell you a bit about the animated productions made in Łódź. Piotrkowska Street is where you’ll meet the first statue – Uszatek the Teddy Bear. Two cartoon cats, Filemon and Bonifacy, are standing next to the Film Museum. Next to the Palm House entrance, you can greet Ćwirek the Sparrow. Two little forest dwellers, Maurycy and Hawranek, are waiting for you in the Na Zdrowiu park (the largest park in Łódź), right next to the ZOO entrance. In front of Aquapark Fala, you will find Pik-Pok, a little penguin. Keep on searching to find more little friends!
For more information, see: https://lodz.travel/en/tourism/what-to-see/lodz-fairyland/ 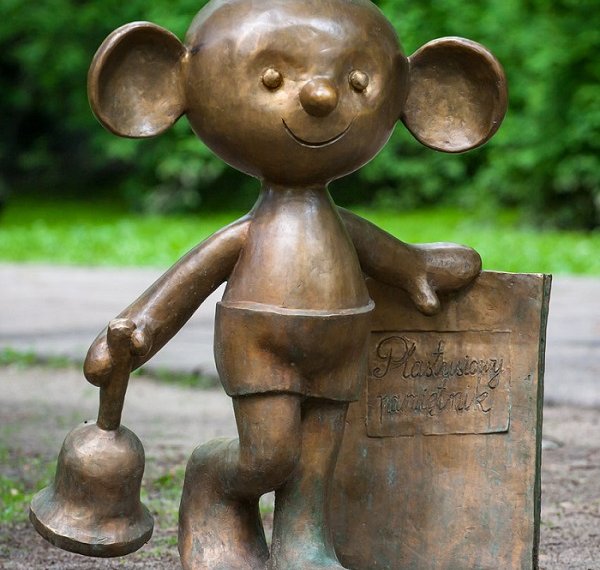 One of the most famous streets in Poland and the longest Polish promenade. It is a showpiece of the city. The tenements and palaces along Piotrkowska house shops, restaurants, cafes with street gardens and pubs. Piotrkowska is bustling with life all year round, with numerous fairs and festivals adding to its unique charm. Make sure to visit Piotrkowska Street in autumn during the Light Move Festival – the "Kinetic Art of Light Festival”. You will be delighted with artistic illuminations, audiovisual performances and countless spatial installations appearing on the facades of eclectic Łódź buildings.
While walking down Piotrkowska Street, look at the renovated courtyards, including the one at the address 138/140. It is “OFF Piotrkowska”, one of the new wonders of Poland, as chosen in a National Geographic Traveler's vote. Róża's Passage is also worth seeing (in the backyard at 3 Piotrkowska Street), as well as the artistic backyard of Wojciech Siudmak's "the Birth of a Day" (4 Więckowskiego St.). As you walk, remember to raise your head and look up! The buildings' facades along Piotrkowska Street are full of interesting eclectic architectural details – caryatids, reliefs, bay windows... Do not forget to look down, too, and you will see the Walk of Fame, which reflects the cinematic heritage of Łódź, and he Monument of Citizens of Łódź, which is a part of the road paved with almost 17,000 cobblestones with cast-iron plaques bearing the names of their founders.
For more information, see: https://lodz.travel/en/tourism/what-to-see/piotrkowska-street/ 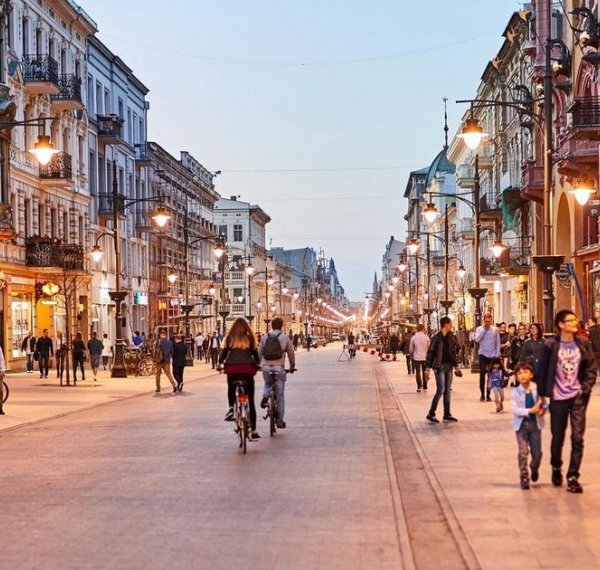 This exceptional shopping, service and entertainment centre is a must-see on the list of places in Łódź. The present cultural and entertainment hub is located on the site of a former textile factory. There used to be, among other things, a spinning mill with a weaving and printing plant. Today, it is a paradise for fans of shopping and good cuisine. Culture and art lovers will also be satisfied – the MS2 Art Museum, the Factory Museum and the Museum of the City of Łódź are located on the premises. The Factory Museum is particularly worth a visit due to the interesting history of the factory itself. 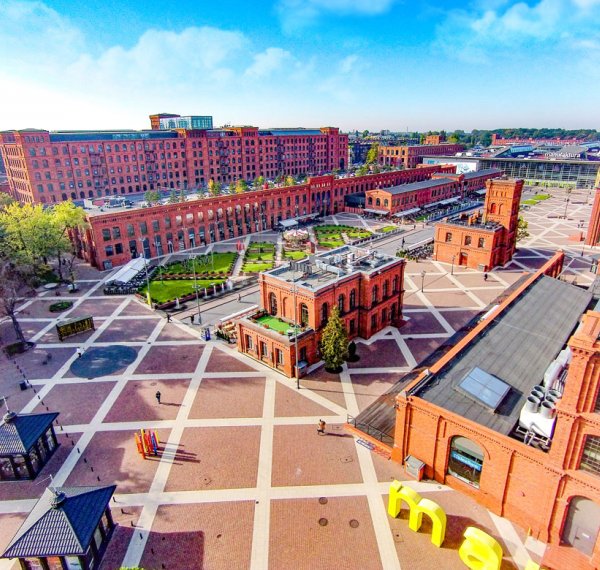 The Orientarium in Łódź is a modern ZOO complex showcasing the fauna and flora of Southeast Asia. Europe's largest Indian elephant, a record-size gharial crocodile, critically endangered Sumatran orangutans and an underwater tunnel in which you can admire sharks and rays swimming overhead – these are just some of the attractions you can enjoy there.

How to get there?

By public transport
The ZOO Orientarium is best accessed by public transport. Use the bus lines 80A, 80B and 80C from different parts of the city. There is also a designated ZOO bus line which transports guest free of charge from all dedicated Orientarium parking lots. The Z13 line goes its extended route on weekends. Also the lines 6MUK, 43AB, 76 and 97AB have changed timetables. The bus stop next to the ZOO is labelled as ZOO ORIENTARIUM.
Free bus line: Orientarium ZOO
Operating every day from 7 am to 7 pm
Route: Konstantynowska, Unii Lubelskiej, Atlas Arena, Bandurskiego, Krzemieniecka
By car
There are five parking lots for those coming to the Orientarium ZOO of Łódź by car. The most convenient way is to head for the car park at the Atlas Arena (entrance from Al. Unii Lubelskiej). From there, you can take the free bus or walk through the old park. 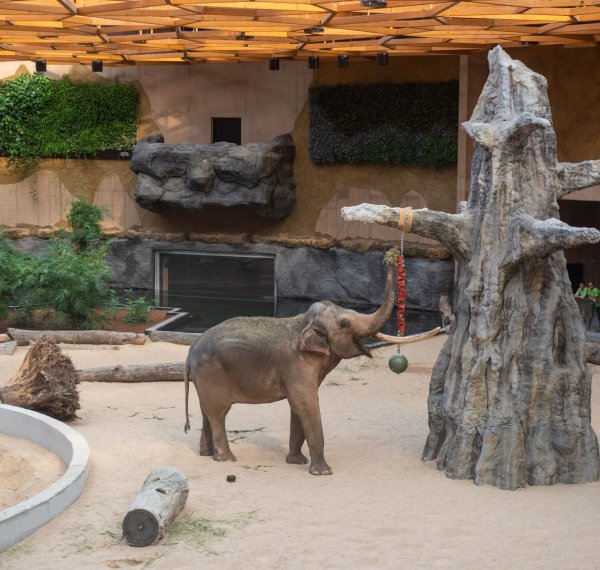 The walls of many buildings in Łódź are decorated with murals, thus creating Poland's largest outdoor urban gallery. Their authors are well-known street artists from Poland (e.g. Proembrion, M-City, Etam) and from other countries (e.g. Osgemeos, Eduardo Kobra, Inti, Aryz, Remed). The murals have been created for years, as a part of, among others, the Urban Forms Gallery Festival and, previously, the International Graffiti Festival. The present outdoor urban gallery is not only graffiti but also various installations on the walls of buildings – made of rods, car parts, fragments of mirrors and even moss.

One of the first modern murals in Łódź, created in 2001 by the Łódź art group Design Futura at 152 Piotrkowska Street, was entered in the Guinness Book of Records. For some time, it remained the largest graffiti in the world. 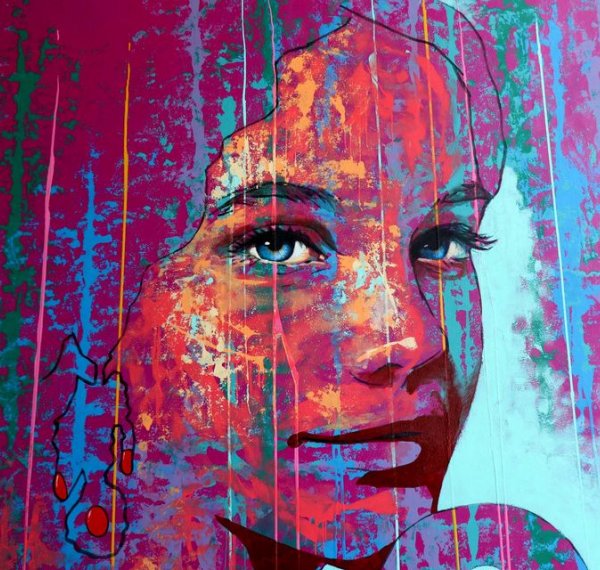 It was the first municipal power plant in Łódź consisting of two units: EC1 East, commissioned in 1907, and EC1 West, built after WWI. After WWII, the power plant of Łódź was transformed into a combined heat and power plant and, in this form, served the citizens of Łódź until the beginning of the 21st century. In 2008, the authorities launched the revitalisation of the historic building in the New Centre of Łódź.

Today, the revitalised complex houses Poland's most modern planetarium, the National Centre for Film Culture, and the Comics Centre, created by the International Festival of Comics and Games organisers.

In 2018, the interactive Science and Technology Centre was opened – the largest one in Poland in terms of space. Three educational paths are presented on almost 8,500 sq m of exhibition space in EC1 - West. The first path is about the processing of energy, the second one is about the development of science and civilisation, and the third one is about exploring the mysteries of the micro-world and macro-world. 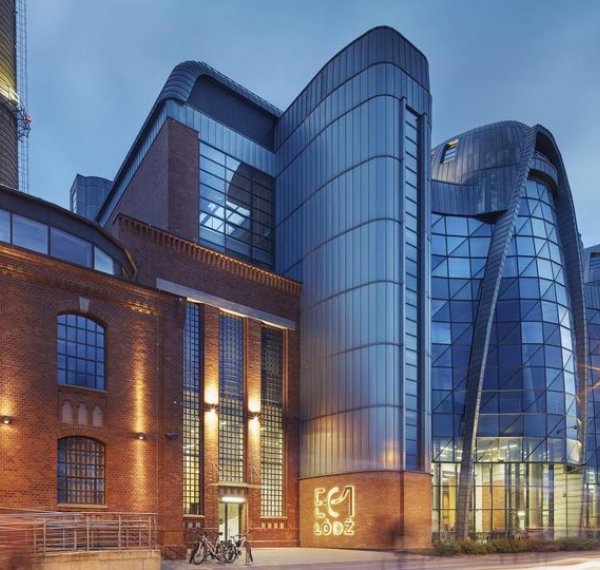 The factory and housing complex on the Jasień River was built in the 19th century by Karol Scheibler, who was then the richest businessman of Łódź. It was a self-sufficient town within a city, modelled on English industrial settlements. There were factory buildings, including a huge castle-like spinning mill, warehouses, the workers' houses called “famuły”, a school, a fire station, two hospitals, a gasworks, a factory club, shops called “konsumy”, the owners' residences, and a railway siding. All those architecturally coherent facilities were planned along straight paved streets.

The decline of the textile industry brought a change in the function of this place. Today, Księży Młyn is a magnet for tourists, artists and photographers. The exceptional post-factory spaces host interesting cultural events, festivals, fashion shows, while former villas and palaces are now museum venues. 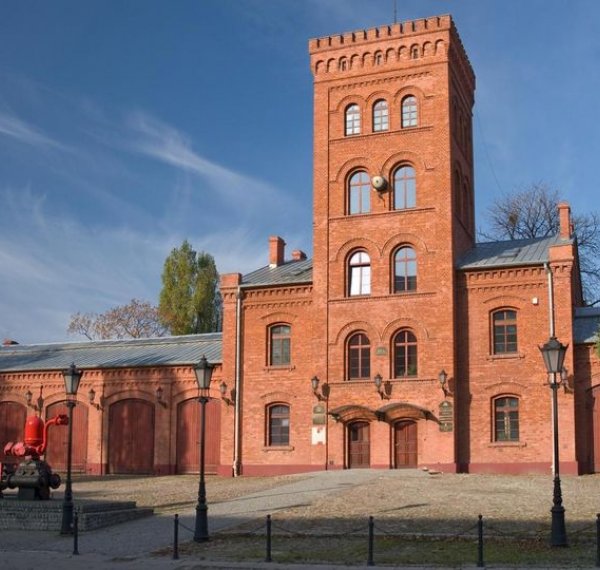 In order to provide services at the highest level, the Website uses cookies saved in the browser's memory . Detailed information on the purpose of their use and the possibility to change cookie settings can be found in the Privacy Policy.
By clicking ACCEPT ALL, you agree to the use of technologies such as cookies and to the processing of your personal data collected on the Internet, such as IP addresses and cookie IDs, for marketing purposes(including automatically matching ads to your interests and measuring their performance) by Film Hotel Sp. z o.o., ul. Łąkowa 29, 90-554, Łódź . You can change cookie settings in the settings.